I’ve always loved Chicago and now there’s another reason to do so!

A 26 foot Sculpture of Marilyn Monroe with her skirt blowing up as in “The Seven Year Itch.”

And people are freaking out…. 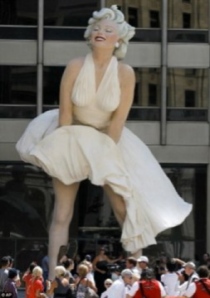 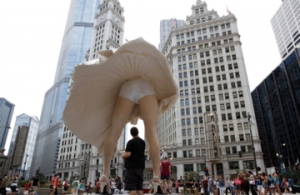 From Chicago local News on Yahoo.com:

The long-awaited 26-foot sculpture of Marilyn Monroe was unveiled on the Magnificent Mile Friday morning, amid controversy about its risqué appearance.

The three-part piece sculpture by artist Seward Johnson was unveiled in Pioneer Court alongside Tribune Tower at 6:15 a.m. Friday.

It depicts Monroe as she appeared in an iconic scene in the 1955 movie “The Seven Year Itch,” where her dress goes flying up as she stands over a New York subway grate, leaving her underwear exposed.

Melissa Farrell of Zeller Realty Group told WBBM Newsradio 780 earlier this week that the 26-foot sculpture will be quite the attraction.

“We are installing a large scale public artwork. It’s very visible to the public and it becomes a tourist attraction. People come to Chicago to see it,” Farrell said.

In his Perspective Thursday night, CBS 2’s Walter Jacobson said the sculpture will be a welcome addition to the Mag Mile.

“So we did not get the Olympics, but we have Ms. Monroe, keeping us on top of the outdoor world, and just when we need it, a smile on that mile,” he said.

But Chicago Tribune columnist Mary Schmich gave the sculpture a scathing review. She called it “as tawdry as a peep show,” and complained about the men walking by who were seen “shooting photos of her crotch while one stuck out his tongue to mime a lick.”

“The original image (from ‘The Seven Year Itch’) is coy,” Schmich wrote. “Marilyn on the Mag Mile is crude.”

CBS 2 viewers weighed in on the new sculpture on Susan Carlson’s Facebook page. Many said the problem lay not with the sculpture, but with people who chose to take prurient photos next to it.

“The statue is beautiful. Nothing like a bunch of idiots who would prefer to make it something that it’s not,” wrote Linda Findlay Love. “Too bad.”

“I think the statue of Marilyn Monroe is beautiful and is an iconic Hollywood scene that created a buzz around the world,” added Robbie Attebery. “People taking photos under the dress need to mature up. Quit being a pig.”

“That’s why it’s causing such a controversy. Men and their perverted thoughts,” wrote Joy L. Potthoff.

But fans and foes alike will have to get used to the sculpture. It will be towering over Michigan Avenue through next spring.